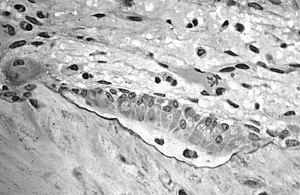 Osteoid is your bone protein matrix that is made up primarily of type 1 collagen. When there is insufficient mineral or osteoblast dysfunction, your osteoid accumulates because it does not mineralize properly.

Soft bones are more prone to bow and fracture than are harder, healthy bones. Your bone tends to break down faster than it can re-form in the case of osteomalacia.

There is a racial predilection with axial osteomalacia. This disorder occurs predominantly in blacks and Caucasians.

Your body has to have phosphate and calcium in order to build healthy, strong bones. If your body does not absorb these minerals correctly or if you do not get enough of them in your diet, this may result in axial osteomalacia. Some of the things that may cause these difficulties include:

?  An autoimmune disease that is called celiac disease

?  Certain drugs that are used to treat seizures like Phenobarbital and phenytoin

?  Certain surgeries like gastrectomy (removing all or part of your stomach)

There are several signs and symptoms that may be an indication of axial osteomalacia. Some of these are:

?  Fatigue in your extremities

?  Limited range of motion in your spinal area

?  Tenderness over your lumbar spine

You or a loved one may have axial osteomalacia. Axial osteomalacia and/or complications that have resulted from it or other conditions that you have in addition to this disorder may have caused the disability of you or your loved one and be what is preventing you from being able to work.