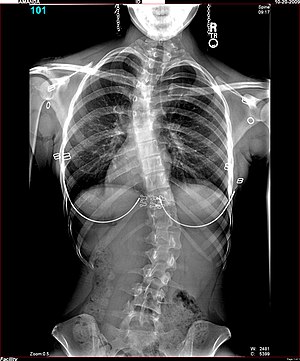 [/caption]
Brittle bone disease is a skeletal disease that is evidenced by very fragile bones that fracture easily. These broken bones often take place under loads that normal bones stand up under without difficulty. Brittle bone disease is a connective tissue disease. It results from a malfunction in your bodys production of the protein collagen. With brittle bone disease, the amount of the collagen that is made by your body is too little, or the quality is too poor. Brittle bone disease is a fairly rare disease. Somewhere between 20,000 and 50,000 people in the United States are affected by this disease. Brittle bone disease develops with equal frequency among all ethnic and racial groups and among women and men. There are four main types of brittle bone disease. Type I is the mildest and most common form of the disease. Signs and symptoms of Type I include: ?  Scoliosis (curvature of the spine) ?  Triangular-shaped face ?  Fragile bones ?  Hearing loss beginning in your 20s ?  Thin, smooth skin ?  Low muscle tone ?  Brittle teeth ?  Loose joints ?  Blue sclerae (whites of the eye). Type II, brittle bone disease accounts for about 10% of the people with this disease. This is the most severe form of the disease. This type of brittle bone disease often causes death at or shortly after birth. About 20% of the people with brittle bone disease have Type III. People with this form of the disease frequently have 100 fractures by the time they reach puberty. Signs and symptoms of Type III are: ?  Sclera that have a purple, gray or blue tint ?  Curvature of the spine (scoliosis) ?  Loose joints ?  Possible respiratory problems ?  Soft bones that bend, as well as break, easily ?  Triangular-shaped face ?  Possible hearing loss ?  Barrel-shaped rib cage ?  Poor tooth development that often causes your teeth to be brittle and discolored ?  Short stature ?  Poor muscle development.   The severity of Type IV is somewhere between Type I and Type III. Breaks usually take place before puberty with the exception of women after menopause. Some of the signs and symptoms of brittle bone disease Type IV include: ?  Below average height ?  Mild to moderate bone deformity ?  Easily overstretched, loose joints ?  Scoliosis (curvature of the spine) ?  Barrel-shaped ribcage ?  Possible hearing loss ?  Triangular-shaped face ?  Possible brittle teeth.