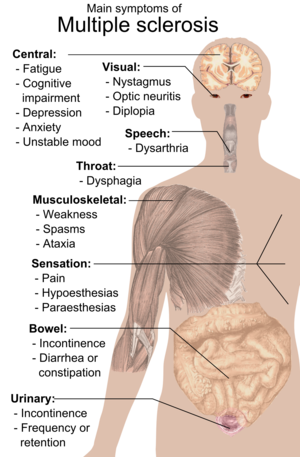 [/caption]
MS (multiple sclerosis) is a chronic, potentially disabling disease of your central nervous system. Your central nervous system is composed of your spinal cord and brain. Researchers believe that MS is an autoimmune disease. Autoimmune diseases are those in which your immune system for some unknown reason attacks the cells and tissues of your own body as if they were something foreign that is invading your body In the case of MS, your autoimmune system mistakenly sends white blood cells and antibodies to attack the proteins in your myelin sheath. Your myelin sheath is a fatty substance that insulates nerve fibers in your spinal cord and brain. This results in inflammation and injury to your myelin sheath and ultimately to your nerves that your myelin sheath surrounds. This, in turn, may cause multiple areas of sclerosis (scarring). Eventually, this damage can slow or block your nerve signals that control your vision, muscle coordination, strength and sensation. An estimated 300,000 people have MS in the United States and probably more than 1 million people around the world. Women are twice as likely as men to develop MS. Most people experience their first signs and symptoms between the ages of 20 and 40. As stated earlier, MS is thought to be an autoimmune disease. Your autoimmune system mistakenly destroys the cells that make your myelin sheath. However, researchers do not know why your bodys immune system reacts like this.   Genetic factors may play a role in causing MS. Researchers also believe that a virus like a cold or flu may trigger episodes of your MS. MS varies in severity and is unpredictable. MS can range anywhere from being relatively benign and mild, to a little disabling, to devastating with permanent disability. The signs and symptoms that are produced by MS vary widely. They depend on where the nerve fibers are that are affected by the disease. Some of the signs and symptoms that you may experience are: